Shibori has been getting a bit of press lately; it seems to be never too far away on my Pinterest feed. It’s not all simple tie-dye though – it’s actually a centuries-old Japanese technique of binding fabric in various ways before dyeing, to create areas that are not exposed to dye. After dyeing and removing the binding, the undyed areas then create the pattern. There are many, many different techniques that are used to do this; each technique produces very distinctive results, and each hand-dyed piece is different from the next.

Despite the differences, there is a particular aesthetic that ties it all together (pardon the pun). Shibori patterns are bold by nature because of their colour, usually indigo on a white ground. Often too, the designs are inclusive of larger repeated motifs (which may be made up of smaller elements), or strong stripes. And of course, dye bleed contributes much to the character of this genre.

However, probably the most important distinction is due to Shibori’s handmade nature. Being handmade means that there are always infinite variations within repetition, giving the pattern a liveliness that is difficult to imitate with machines – a slight change in fold here, a shift in thread there.

This labour-intensive craft might seem like a lot of work just to produce a single length of fabric, but it’s that skilful liveliness – the perfectly imperfect – which is highly valued through much of Japanese handcrafts. Each piece of fabric may take months to complete, from the initial design, though the binding and dyeing process, to the finished item. There is a huge set of skills required for each traditional technique, and they can take years to master, sometimes decades, and there has been concern that some of these traditional skills are dying out as the population ages. 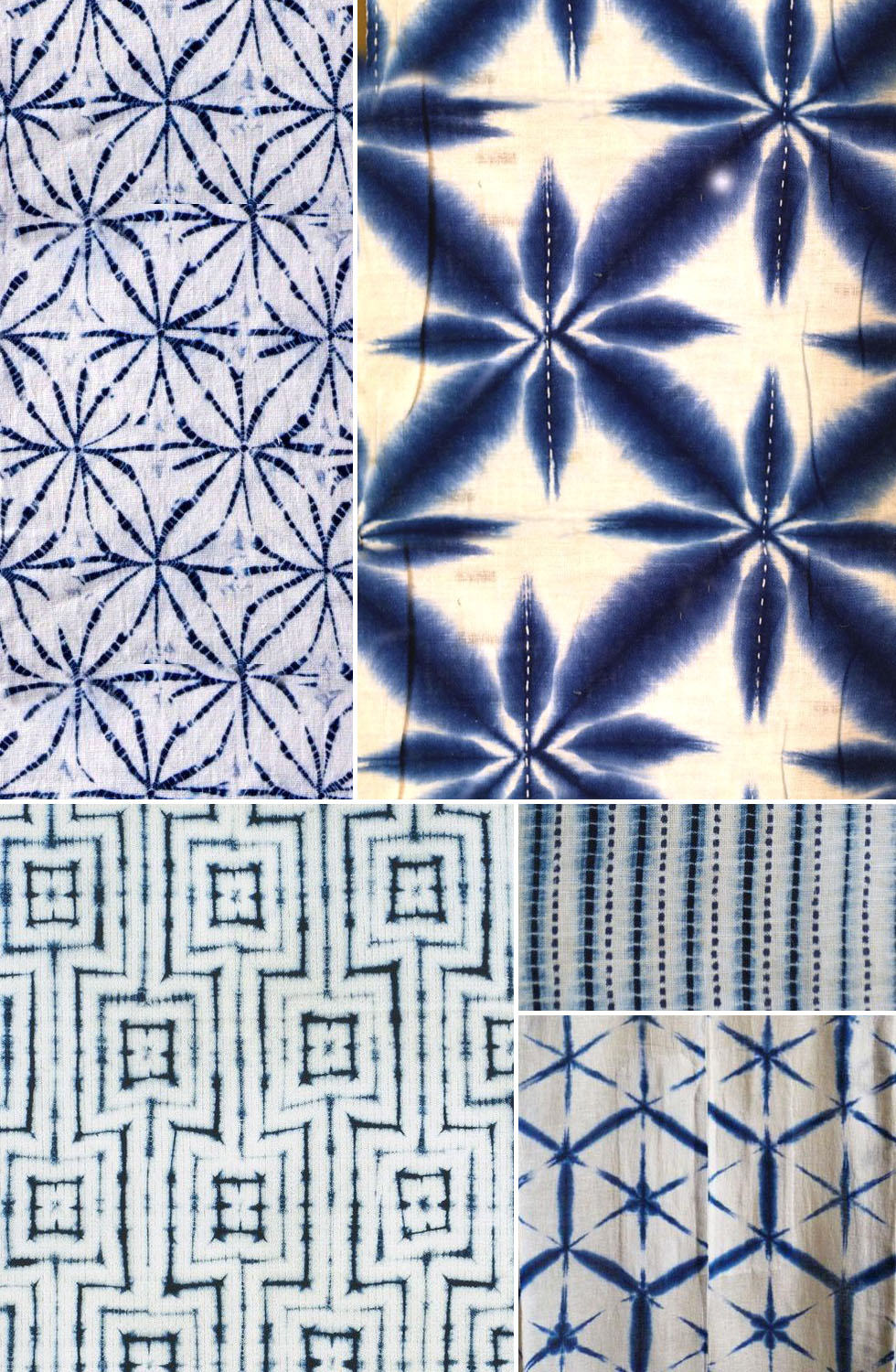 Images via: (clockwise from top left) 1. unknown source via Pinterest; 2. via http://styleindicator.com ; 3. & 4. via  http://threads.srithreads.com ; 5. by shibori master Motohiko Katano via http://shibori.org

Prior to dyeing, the technique is decided and the design is carefully planned, whether it is to be an all-over pattern, or a particular design, or perhaps even a picture. Often, the design is drawn onto the fabric first – either directly, or through a stencil. Then the painstaking work of the binding begins.

Each of the binding techniques tend to fall into one of four categories.

– Hand-knotting with tool – a delicate process where each dot element of the design is placed over a pointy stick, which the artisan then loops with thread an exact number of times and ties each one. The thickness and type of thread is important too, and is changed depending on the final effect desired.

– Stitching – can be used in a single line with a single thread, to create flowing lines through the fabric, or a specific drawing. It can also be used to create numerous lines, giving an all-over pattern.

– Pleating – the fabric is gathered into careful pleats and bound before dyeing, so that only the peaks of the pleats receive dye, resulting in vertical stripes. The resulting pattern can be varied by changing the size of the pleats and the intervals between bindings, and by reversing peaks and troughs of some of the pleats. A variation on this is where the cloth is wrapped around a pole and pushed into diagonal folds before dyeing, resulting in the traditional arashi (‘storm’) pattern, so named because it is reminiscent of driving rain.

– Folding and clamping – the fabric is folded carefully and clamped between two pieces of wood. Because the dye penetrates along the sides of the blocks, a gridded pattern is created. By varying the shape of the wood as well as the folding, new patterns are created, and now, artists are using laser-cut wood to create even more innovative patterns. 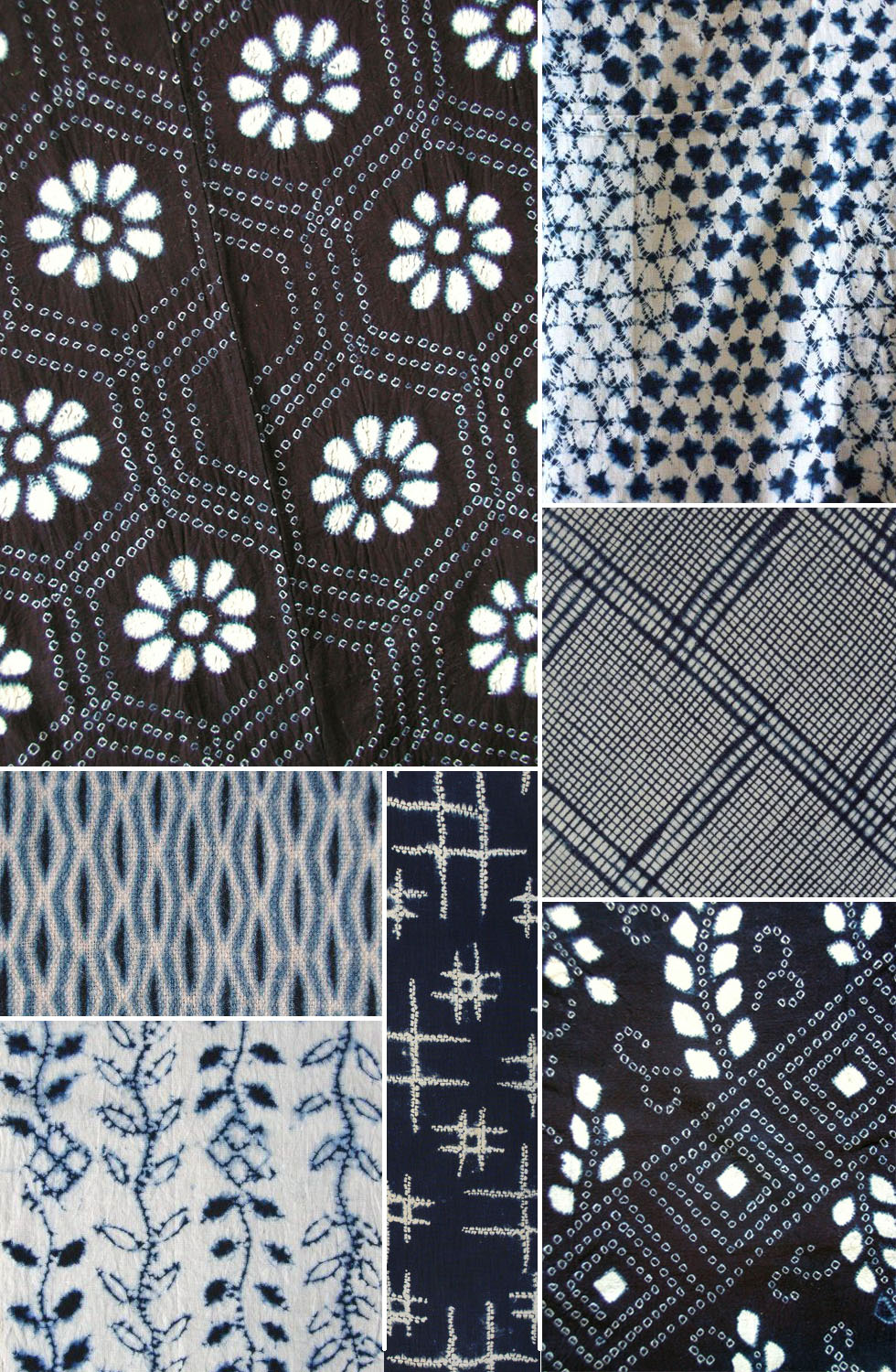