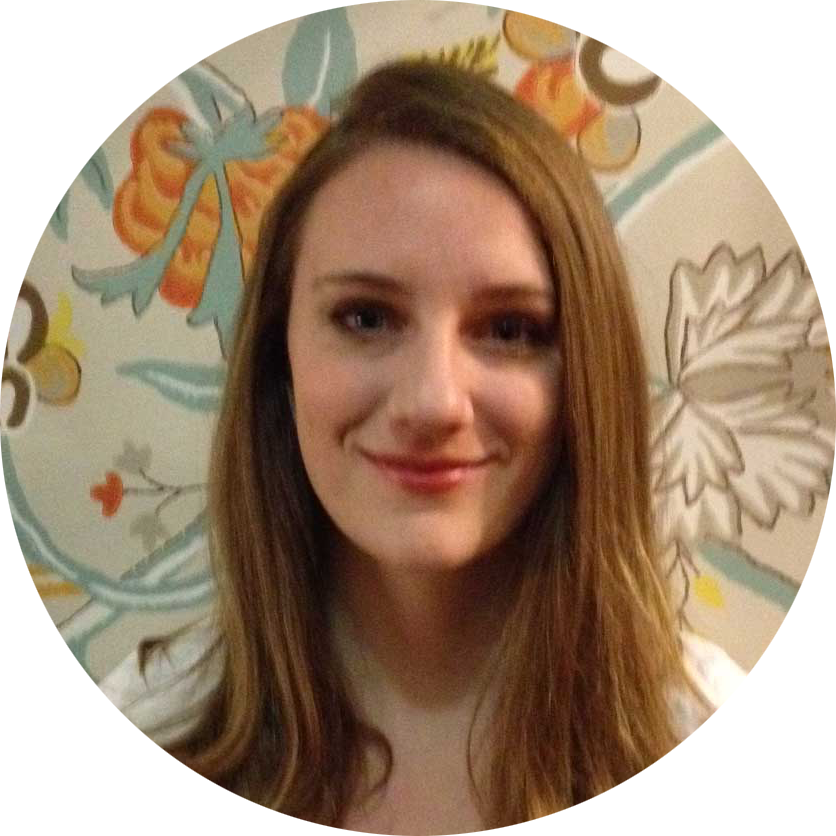 Wallpaper is experiencing a resurgence in popularity. No longer relegated to your grandmother’s dining room, wallpaper now makes proud appearances in fashion editorials, chic restaurants, and maybe even your dining room. To better understand its place in our world of decorative arts, we need to look at how it all began.

The earliest wallpapers originated in China, where ingenious craftspeople honed their paper-making skills long before their European counterparts. These papers were typically painted by hand and installed in panels in the homes of the nobility. Because the patterns and printing style of these papers varied only slightly throughout several centuries, we look to Europe to better understand the history and evolution of wallpaper.

European artisans developed elaborate tapestries throughout the Middle Ages and Renaissance to decorate and insulate the homes of the wealthy. By the 17th century, with the advent of less expensive papers, folks of slightly lower social rank would paste paper sheets decorated with pictures (often illustrations created by book engravers) onto the walls of their homes. This trend evolved, and single paper sheets block printed with patterning began what we now know as “wallpaper”. 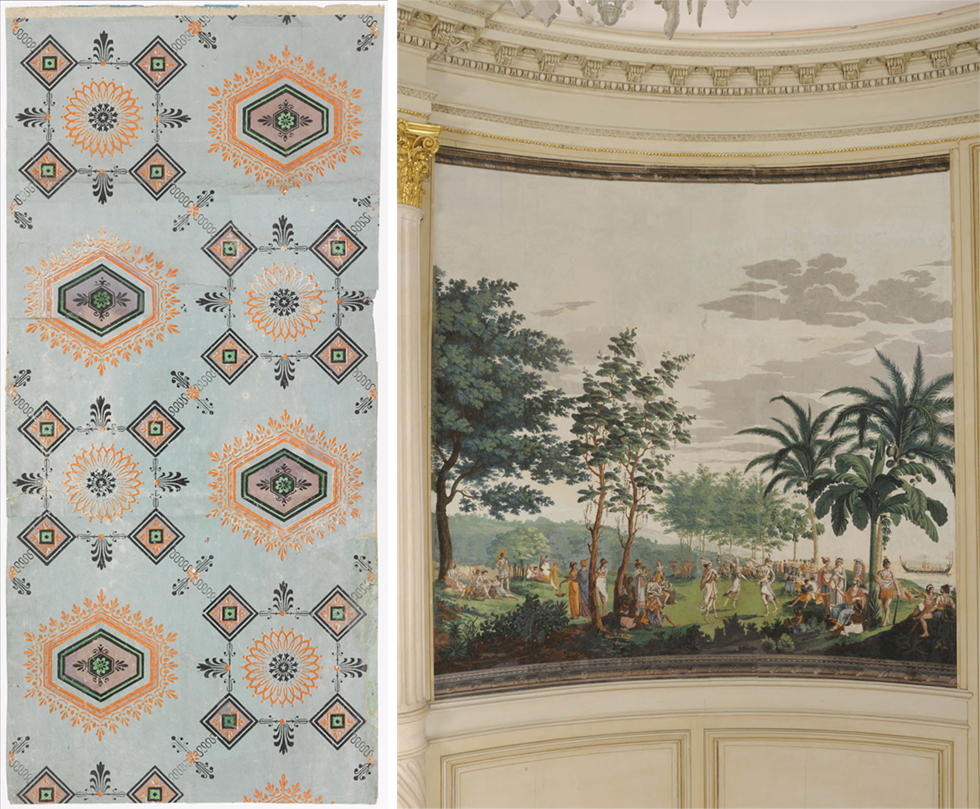 Block printing (initially simple black inks printed on white paper) developed significantly in the 18th century. As wallpaper grew in popularity, so did the level of craftsmanship and attention to detail. More complicated and elaborately colored papers became the norm. Artisans in France developed outstanding papers depicting natural landscapes (often called scenics), frequently using dozens of colors and hundreds of blocks. These exquisite papers hung, as the tapestries before them, exclusively in the homes of the wealthy.

Not until the advent of mass production could wallpaper truly reach the middle and lower classes. In the 1840s, machines capable of manufacturing endless rolls of paper completely revolutionized the wallpaper industry. Immediately following this development, woodblocks became cylinders (frequently called rollers), and companies in Europe and the United States began printing wallpaper en masse. These advances in manufacturing created a cultural appetite for patterned materials throughout the home: carpets, textiles and walls. Popular pattern styles included florals (no one is lying when they say florals are always on trend), drapery, landscape figures, architectural ornamentation, and gothic revival designs. By the 1870s, Americans were buying tens of millions of wallpaper rolls each year. 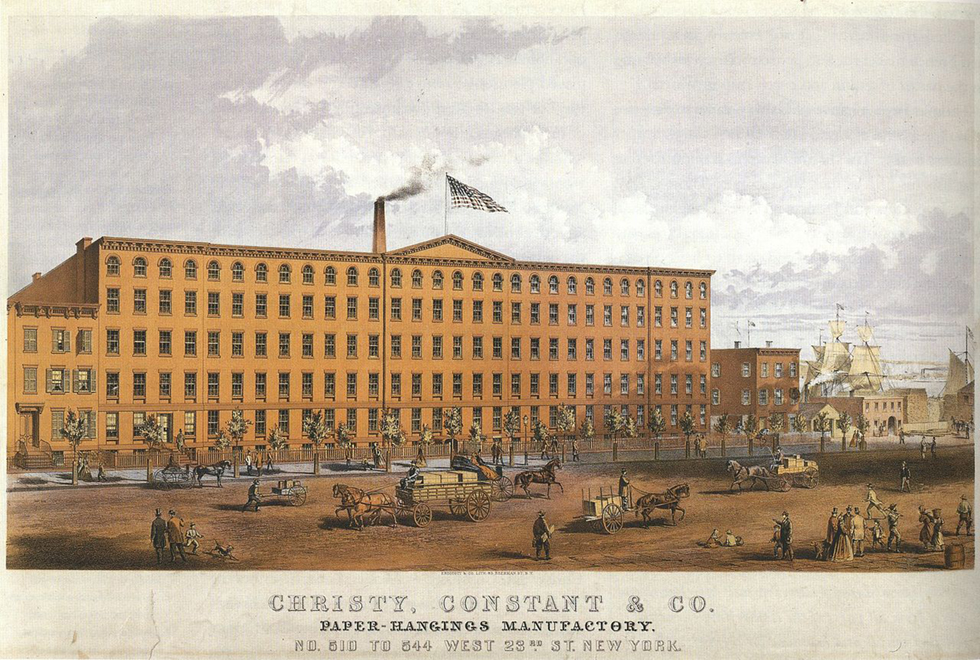 While this rise in mass production brought ornamentation and style into the homes of folks who previously could never have afforded such luxury (in 1879, wallpaper was typically priced around .$06/roll), some designers, artists and critics deplored declines in quality and attention to detail. In England, the Arts and Crafts movement began, led largely by wallpaper designer extraordinaire, William Morris. Morris decried factory production and the demise of the artist-craftsman. Morris wanted people to enjoy both the design and creation of the product, and believed that designers separated from the manufacturing process created inferior patterns. This video depicts an original William Morris wallpaper being hand-block printed today.

While Morris influenced a generation of designers to return to the handmade, mass produced wallpaper continued to remain popular throughout Europe and the United States through the early 20th Century. However, with the advent of modernism, and it’s many thinkers who believed ornamentation detracted from the beauty of architectural design, the wealthy and the middle classes began to favor the simplicity and perceived cleanliness of paint. Throughout the 20th century, the popularity of wallpaper rose and fell, never regaining the same prevalence it enjoyed in the late 1800s.

Today we live in a new world of wallpaper. With advances in the quality and cost of digital printing, everyone from giant companies to teeny print studios can manufacture products never once possible using traditional print methods (incredibly crisp, photographic images, as well as large, non repeating murals, such as this one by Trove.) Additionally, products like wall decals and removable/repositionable wallpaper bring ease to renters and other folks reluctant to take the wallpaper plunge. These new products, in addition to a surge in wallpaper demand in emerging markets (Chinese consumers have profoundly reshaped and revitalized the global wallpaper industry), we’re now living in a new golden age for wallcoverings.

Tennyson Tippy lives and works as a freelance artist and designer specializing in artwork and patterns for interiors. Her clients include national retailers like Anthropologie and Free People as well as numerous restaurants throughout the East Coast. She passionately collects wallpapers new and old, finding inventive ways to store and display them in her tiny Philadelphia row home. 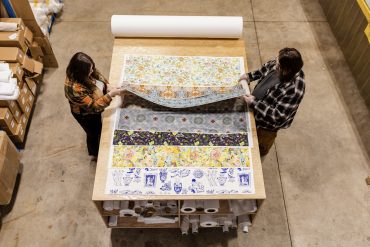